A brand sponsor must put in place a decision-making process which clearly outlines suitable selection criteria against which potential sponsorship can be identified and evaluated.
0  
By Giovanna Casa Strategy May 17, 2022
Outline the foremost SPORT properties within the bounds of national and international motorcycling.
Having assessed the rationale behind sponsorship investment decision, the next stage is to understand the planning process that goes into identifying the correct sponsorship relationship for a company or brand.

This process requires an in-depth identification of suitable opportunities that will help to fulfill the sponsor’s overall objectives and resonate with the company’s target market.

#1 Property selection
#2 Type of relationship
#3 Rights assessment
Sponsorship planning process –
To do this effectively a potential sponsor must put in place a decision-making process which clearly outlines suitable selection criteria against which potential sponsorship can be identified and evaluated. In addition, it is vital to identify the key rights and benefits that will need to be amalgamated into a contractual agreement between the parties to satisfy the overall marketing needs.
Our intentions are to provide you with some essential principles to help understand the basics of professional sponsorship.

The planning process has several different elements that need to be integrated before making final decisions to ensure the sponsorship chosen is as effective as possible. We can resume it by three key actions:

From the early days sport dominated the sponsorship marketplace in terms of availability, attractiveness and potential effectiveness, largely due to the mass brand exposure available via many hours of guaranteed television and other media coverage.
However, the effectiveness of sponsorship has resulted in an explosion of commercial partnership opportunities which now extend way beyond the original heartland of sport. In its traditional heartlands, sponsorship has become increasingly sophisticated. It is no coincidence that demand for sponsorship opportunities has blossomed alongside the dramatic increase in the number of available media and digital channels. This has led to a significant boom in the type of different opportunities available.
For example, the sponsorship of sporting teams/associations, venues, official supplier packages, individuals and even performance data has seen the sports sponsorship market become increasingly fragmented and complicated.

The selection process, for properties, begins by looking at the universe of opportunities available in the marketplace.


At some stage after drawing up a sponsorship strategy a company will commence the process of finding – or creating – the right sponsorship relationship to fit the brand strategy and help satisfy the marketing objectives.
IT MATCHes THE BRAND strategy with YOUR IDEAL SPONSORSHIP TERRITORY.
Property selection process –

This journey might take a very short or very long time. The complication and longevity of the process may well depend on the way in which the ideal sponsorship territory is defined within the strategy, essentially it is valid to refer to these two main concepts:

Undoubtedly, the more precise the strategic requirements the easier the search to find the perfect sponsorship relationship becomes. The ideal match between a company brand and motorcycling needs to be evaluated over the complete line up of commercial opportunities the properties make available for starting a win-win relationship.

But now we outline the foremost properties the national and international motorcycling presents to any potential brand sponsors to start planning its best relationship.

FIM JUNIOR GP Championship
This represents a new chapter for the best known and most successful path on the Road to MotoGP™ in 2022. The FIM Moto3™ Junior World Championship has become the FIM JuniorGP™ World Championship, upholding its status and position as a global vital proving ground for young riders.

The series also gains a new identity as part of this new era, with a new logo for the Moto3™ category – also shared with the Championship. The Hawkers European Talent Cup and the Moto2™ European Championship also begin this new chapter with a fresh visual and proper identity for each.

More than 80% of Grand Prix riders have passed through the series on their Road to MotoGP™, rising to over 90% for the Moto3™ grid. With its new name and identity, the FIM JuniorGP™ World Championship will continue fostering talent as its 25th year begins.

It is the entry level for youth to race motorcycles, the sport program links the Italian Minimoto with the MiniGP Championship. The Minimoto is set by classes like Cadet (8-10 years) and Junior (9-10-11 years), and more combined for inclusion of older ages: Open (max age 25 years) and Amateurs (over 25 years).

Then the Italian MiniGP Championship is set by PreMiniGP (10-12 years) and the MiniGP50 (11-13 years) races. The event meetings are scheduled into 6 rounds over 5 weekends, racing on circuits such as Franciacorta and the “short track” of Vallelunga.

The ELF CIV serie sporting season takes place in 12 races out of 6 Rounds in the most prestigious race tracks such as the Marco Simoncelli Misano World Circuit, the Autodromo Internazionale Enzo e Dino Ferrari in Imola, the Mugello Circuit and Autodromo Vallelunga close to the City of Rome.
It is the springboard for the best Italian riders towards the international competitions:

The ELF CIV over the years has grown up riders such as Claudio Corti, Michele Pirro, Danilo Petrucci, Matteo Baiocco. And many others like Andrea Locatelli, Franco Morbidelli, Marco Bezzecchi, Fabio Di Giannantonio which jumped on MotoGP and World Superbike rounds.

Inside the FMI arena – Italian Motorcycle Federation – there is also “talenti Azzurri FMI” that is the talent program for growing and for preparing the best talented riders to evolve their future into motorsport alongside the most important Team. 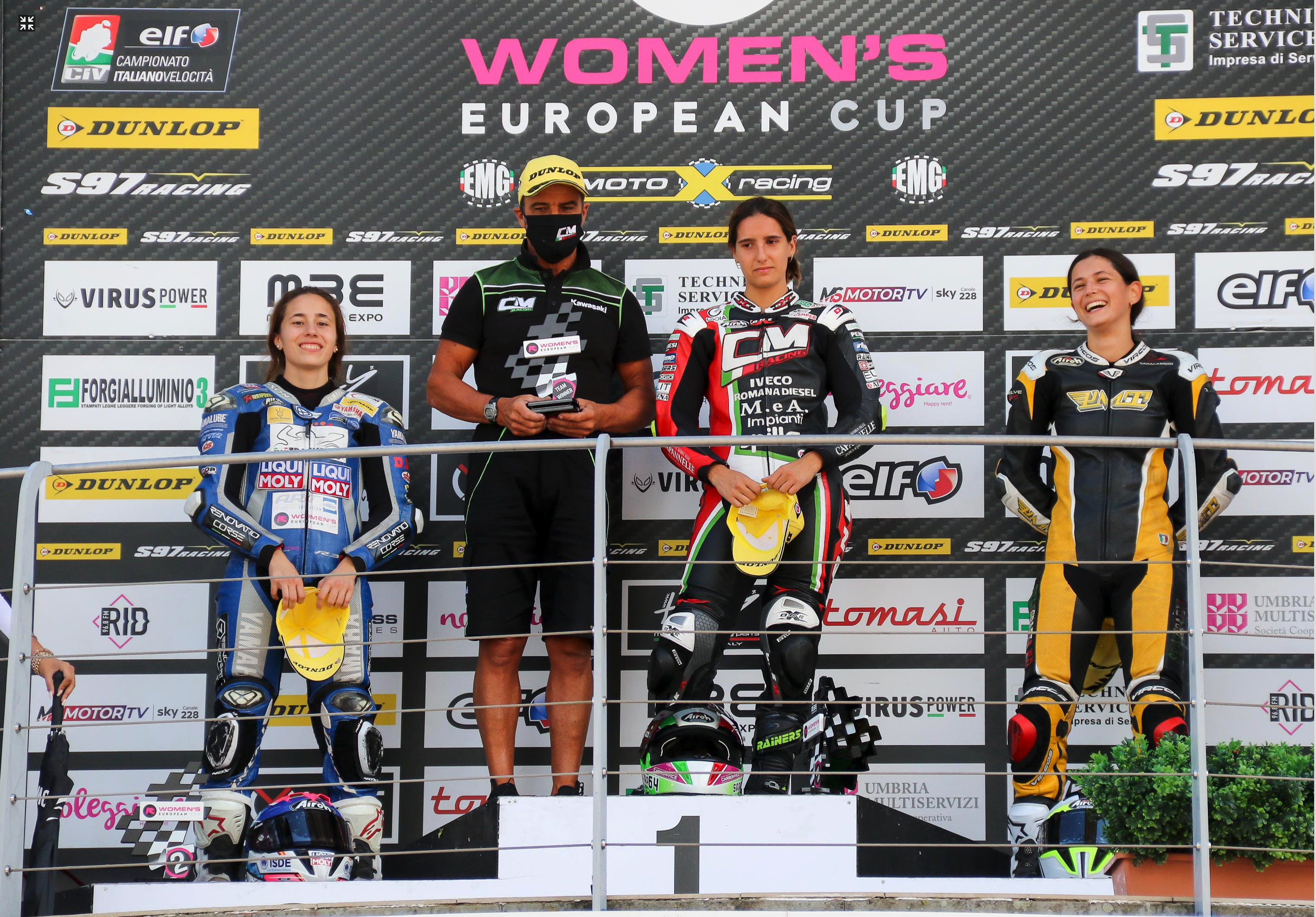 It is the pinnacle level for women in motorcycling, with a nine rounds sporting program over 6 weekends in 2022, designed for ladies racing to win the new exclusive European cup.

It is an ambitious plan held by a well recognised Italian promoter which debuted in a full pandemic period in 2020, with 4 rounds race. The second season in 2021 and the new one in 2022 have confirmed the success of intentions to have a sparkling competition completely issued for women.

It started from Italy and is expanding in Europe through Croatia on the Grobnik circuit for an event meeting in the 2022 season ahead.

The starting grid last season had 26 riders aligned to win the title which has been celebrated twice from the Spaniard Beatriz Neila Santos. The winner dominated in her own first crown victory but the second title she won saw her in a much higher level of competition to confirm the final result. This means the sport program is growing up fast and involves participants in it.

The greatest British domestic bike series on the planet, attracting some of the world’s best riders and most prestigious manufacturers.

The British Superbike Championship is a nationally recognised sports marketing platform, operating on a global scale, with live broadcast throughout Europe, South America and Asia on the Discovery network of channels.

With up to 30 riders from six manufactures battling it out on machinery capable of speeds of 200mph, the British Superbike Championship attracts a huge, loyal fan following.

Faced with unprecedented disruption and the prospect of limited racing in 2020, MSVR as the sporting and commercial rights holder, together with the wider British Superbike paddock have once again produced a thrilling season of on and off track action.

MotorSport Vision (MSV) acquired the organisational and commercial rights to BSB in 2008, and the series has benefitted massively from the company’s expertise and careful judgment.  BSB is now a globally recognised brand, broadcast live throughout Europe and Asia, with some of the world’s best riders and most prestigious manufacturers. And, above all, it’s possibly the most thrilling spectator sport for the category.

The Motul FIM Superbike World Championship is split up into various classes in order to encourage fierce competition between a selection of manufacturers and riders of various age groups. However, the overall concept has been the same since the inauguration of WorldSBK in 1988: competitors racing production-based machines that fans can easily relate to their road models.

WorldSBKs class leading category features production-based racing motorcycles. In comparison with standard road models, a World Superbike machine is allowed certain modifications: Engine management, exhaust system, suspension, brakes and a number of engine parts. The bike must weight a minimum of 168kg, with power ranging between 750cc and 1200cc, depending on the number of cylinders the engine contains. Since limited technical modifications were introduced for 2015, tuning bikes is now subject to more limitations than in previous years.

The World Supersport class features mid-range machines. These bikes are smaller, lighter and less powerful than their World Superbike counterparts and fewer modifications are allowed. Engine power ranges from 400cc to 750cc, depending on the number of cylinders. The WorldSSP class produces some amazing on-track battles and is vitally important to manufacturers too.

World Supersport 300 is a feeder class which has been introduced for the first time in 2017. With a minimum rider age of 15, it features a range of lightweight sport bikes and is an easily accessible championship on the world stage. With a jam-packed grid, it is another fiercely contested class. It features any motorcycle classed as an A2 machine on the road in Europe (excluding A1 class machines). All bikes are homologated by motorcycle racing governing body the FIM and are subject to modifications to weight and rev limits by the SBK Commission, in order to ensure the maximum possible parity.

The oldest motorsports championship in existence is also the most exciting in the world. MotoGP™ has been thrilling race fans since 1949 when it was inaugurated as the FIM Road Racing World Championship Grand Prix, and is constantly winning new fans as it continues to expand around the globe.

Its 19-round season visits a total of 16 countries across four continents, showcasing the planet’s fastest motorcycle racers in its three categories comprising the Moto3TM, Moto2TM and MotoGP™ World Championships – as the pinnacle of motorcycle racing.

MotoGP™ features the fastest prototype machinery on the planet. Producing over 250hp on a bike that weighs less than 60kg, results in 0-100km/h (62mph) acceleration in under three seconds, and top speeds above 350km/h (217mph). Add to this the lean angles of over 60 degrees and braking forces more than 1.5G, the sheer skill and bravery of the riders is clear.

Breath-taking races, charismatic and daring riders, unmatchable history and truly global television coverage generate an unrivaled reach for MotoGP™. This international exposure shows how far-reaching the MotoGP™ Championship program is. The diversity in the series held by the organiser Dorna is also highlighted by the 18 nationalities that are currently represented in the 2021 World Championship. 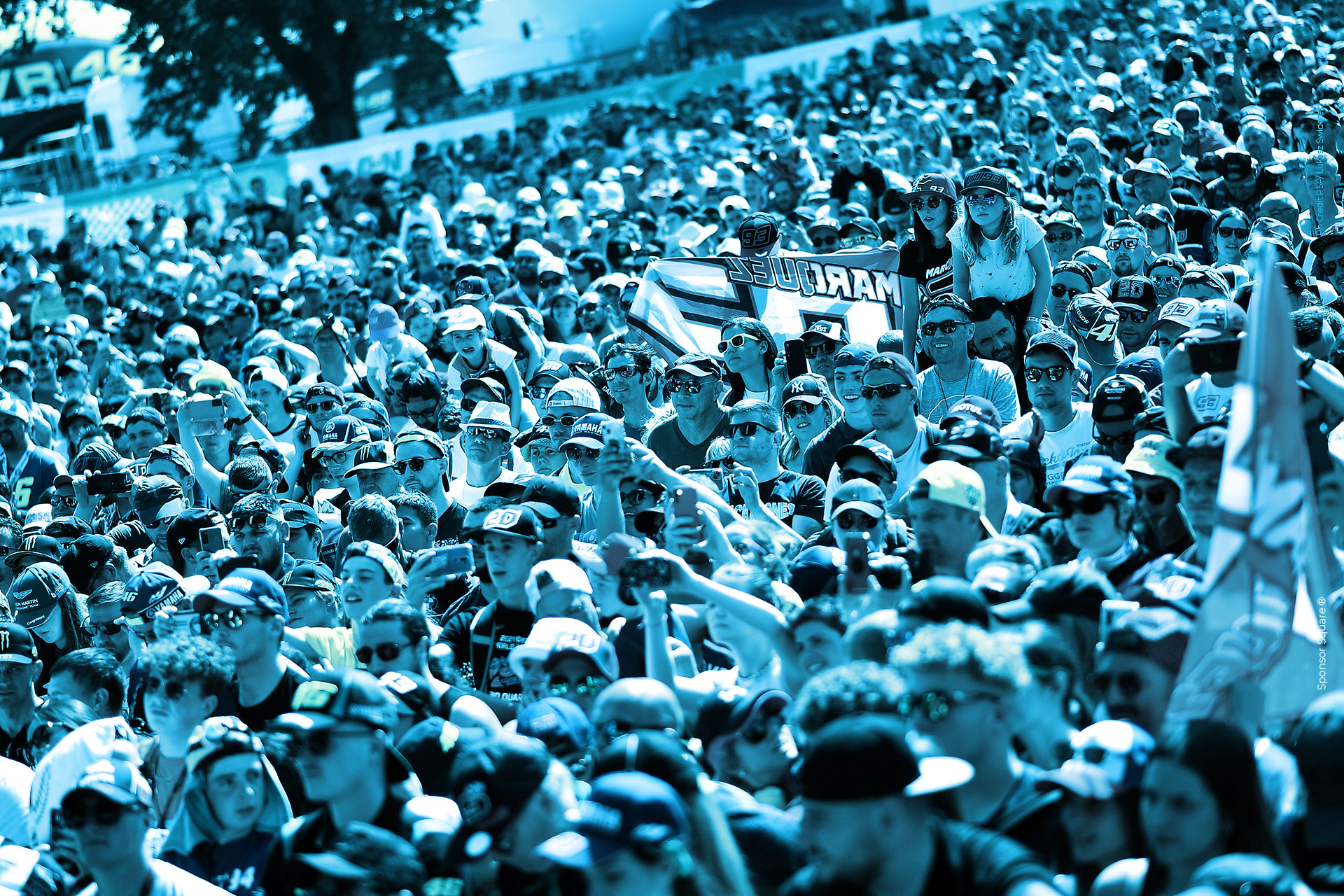 From a company perspective in order to review a sponsorship proposal accurately, it is common to build a proper brand own “evaluation criteria” which rates details and essentials against the brand strategy, according to relevance and “fit” as well as delivery of the type of benefits that will satisfy objectives.

In reality, most sponsors are now sufficiently insightful to have a good idea of what type of sponsorship relationship they are seeking and in which areas of motorsport. Whether a sponsor has preference or not,  a programme of pre-research to investigate areas of potential interests is likely to take place in order to identify the ideal relationship.
It is worth pointing out that proposals received from professional facilitators – agencies or consultants – probably bear more scrutiny; if only because, as professionals, it is a fair assumption that some research and elaboration have been done about a company’s needs and its strategy before releasing a project proposal.

Sponsorship properties also have certain lifestyle characteristics which can be assigned to brands through a close partnership. These are most likely associated with demographic profiling of the activities concerned and their key participant audiences.

However, it is likely that while “fit” is important, property selection will also involve a much deeper analysis of the benefits offered by individual properties rather than solely relying on basic instinct. Especially if a brand company intends to run a professional sponsorship having the opportunity to win a new layer of reputation and make improvements measurable.